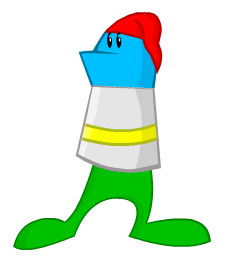 One of Barry Bird's best friends and co-workers. He usually is a turn up for Barry's email show, but is also the helper.

A drow (dark elf). He is not really evil, just violent. If you can convince him not to kill you, you're in. At any given time he will be wielding up to two katana. Believes in brotherhood, and thus refuses to kill any other drow.

Also a drow. Remolay's brother. Very much good, he is usually the only one that can stop Remolay from killing. Remolay probably would have killed him by now, but Remadin can use magic to defend himself, Also the whole brother thing.

A kid. An autistic kid. Do we allow these? WAIT! StrongIntelligent is autistic, not drunk!!!! 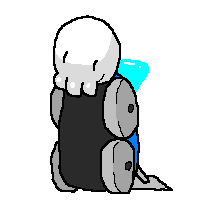 Skullbuggy, or SkullB, is an aptly-named robot with a skull for a head and a car for a body. He is the star of his show, The SkullB Show. He lives with his friend Jerry and his wife Casey in a big house in Decentville, NH. Skullbuggy is a generally laid-back, fun-loving guy who enjoys nothing more than a good laugh. However, due to his somewhat mistimed comedic actions, his friends can be somewhat angry at him. Skullbuggy is enemies primarily with his estranged brother, Number Two. Other enemies include Lucy, Chernobog, and a robot communist.

Quote: "Good food is all the time!"

The Spart is a down the line descendant of a Spartan cheat from those times. He is a fan of basketball, and Ice Cream. His favourite movie is Batman and Robin and he is known to play Xbox. The reason for his paleness is a mild version of vitiligo. 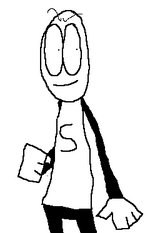 Stan is a weird black and white colored man. He lives in the city of Pinewood, USA, where he and his neighbor, Jon, hang out and do pretty much nothing. Stan was originally a character from his own self-title comic book--in fact, the first episode of The Stan Show was an adaptation of the comic's first issue. Stan enjoys the occasional Spark Cola and wearing shirts with the letter "S" on them.

Strong Rad is a 25-year-old who lives at Free Island, U.S.A. He rarely gets scared or frowns.

Sinta-tan is the queen of a faraway kingdom called Kingdom Kitty. She claims to have created ToRi, Mikey, and the rest of the characters in the universe. She creates beings with her giant pencil, and can erase them from existance with her giant eraser. Not to mention she can turn into a firey lion when she's angry.

Quote: "I may not be immortal, but hey, I'm still all powerful."

Stormpaw is Sinta-tan's older brother. He's quite jealous at his younger sister's abilities, because all he has is the power to control gravity. He's pretty evil, and leads the only cat clan in Free Country, USA. He and his clan do travel from place to place, so you will see him and his clan out of Free Country.

Quote: "Deputy Angelfeather, please be a darling and lead the way. Don't make me get the whip!"

The Exact Same is somewhat similar to The Cheat, except that it's blue. Yes, The is part of its name.

Taco is a rare purple cheat, and the local Mary-Sue. She's just the god of knowledge in a female purple cheat's body. Owned by Mikey The Insane Cat, who seems to be much dumber then her, which seems like she owns HIM. Quote: "Someone PLEASE get this weirdo outta here! I'm getting brainaches!" More info on my characters page. Someday.

Made from hairs of Taco and several cheat species in a lab, Taco Jr broke out, and got caught by Mikey and Rokko. Rokko noticed that Taco Jr had purple hair too, so named her Taco Jr. She isn't as smart as her main dna, Taco, but seems to know how to read most books. Quote: "Meh meh mrrrrrr meow." More info on my characters page. Someday.

Transported to this universe by a faulty portal made by her boyfriend's best friend (She was hoping to get to the Sonic Universe to get the Dark Jewel, the origin of evil in that universe.), ToRi started wandering around, when she met Forsythe The Wolf and Mikey The Insane Cat. She's now friends with them. Quote: "IT'S A CAPITAL R! NOT A SMALL ONE! YEESH! PICKY OR SOMETHIN'?" More info on my characters page. Someday.

Depending on which universe he is in, He is either a Seer of a sort or he changes jobs. With him usually is a man named Elipses. Named for his first appearance, Ironically, where he was first seen as "..."

Emperor Vindicator Psychosymatis I, better known as Vindicator, is a soulless, heartless, demon made from nothing when the universe was created. He currently lives on Earth and watches over the people on the planet, so they don't screw up. He sees fun in blowing things up and having power. He enjoys playing games and anime. 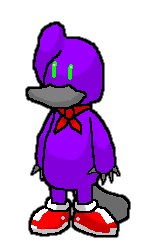 Zippy P. Platypus is a purple platypus. Zippy lives in a small suburb called Anytown, USA, where he and his friends have wacky not-quite-adventures. He has his own self-titled email show, in which he checks emails (be they good or bad) from his loyal viewers. Zippy enjoys prawns and the sweet taste of orange soda.