How did you make a website ending with that?

Then whose is it?

My email address is set up on the wiki. I'm pretty sure I already confirmed it. -

I made a little video of me playing Airstriker. Do you mind if I upload it to YouTube? -

I sent my gift to your hotmail account. FloppyDongHersh

Oh, and does gift recieved mean "Has sent their gift" or "Has recieved there gift"? FloppyDongHersh

The bottom panel on here. Who is that tiny guy in the cape at the bottom of the cliff you're standing on? belstrnnmmvnmn 00:04, 29 April 2009 (UTC) 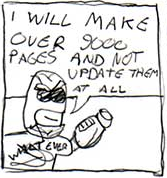 i am now forever indebted to you -- Badstar

are you really leaving

Skully said i could download TREASURE HUNT 2 on this page

It seems that my partner is leaving the wiki? Could you make it so I give my gift to another person? Toonypie

never have I seen so much excitement -- Badstar

I spread the word on Twitter. BUS ON -- Badstar

see it's joke when we imply that we're starting a war

SO WE START A WAR BUT NOT REALLY YAAAAAY Lucian Summers

By the dang way, do you want me to change your name to Svetlana for you? Lucian Summers

see i can probably do that myself but again i'm pretty sure i don't care about this place anymore and was just reminded of it because there's someone on the forums asking for an account and i thought this didn't even exist anymore -from the desk of 20eric06t-AES 03:25, 19 May 2012 (UTC)

you were such an hero.TVB