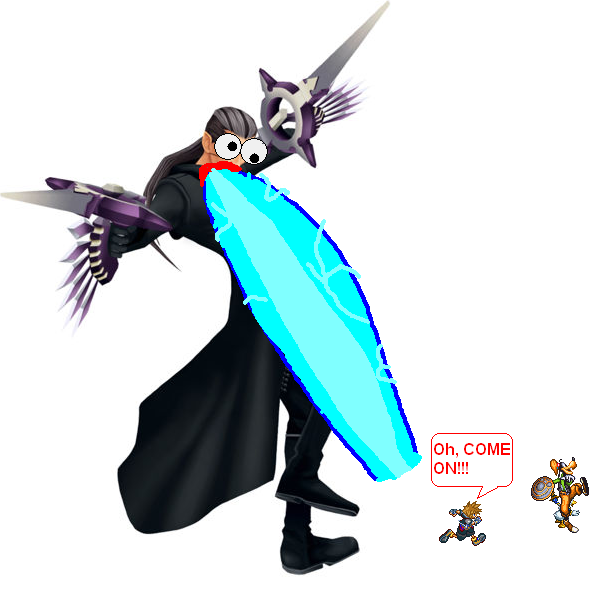 I made it, and thought I'd show it to you.

I made you a spritesheet! 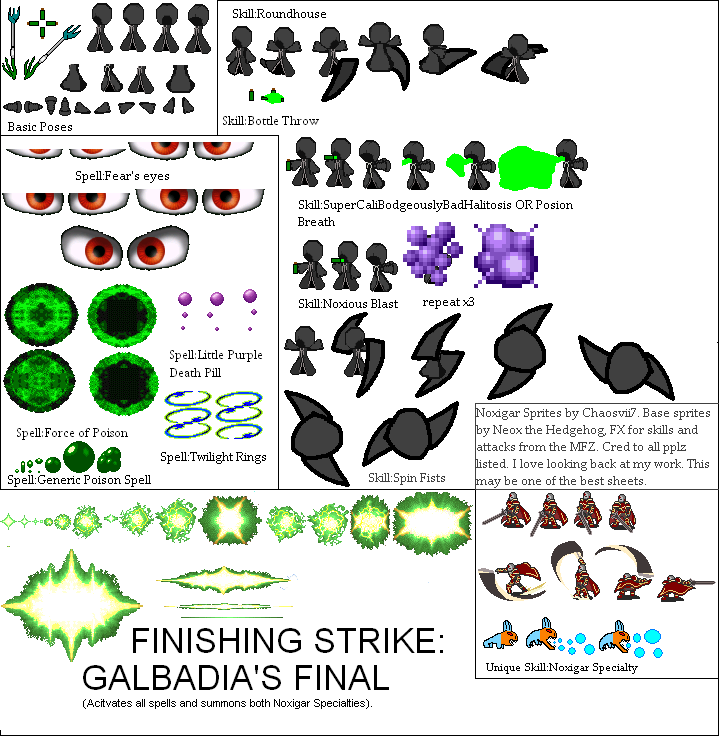 I've been meaning to ask you: Do you want to do an Organization XIII-Themed episode with you, me, and Sephiroth?

With an episode that makes all 3 of us forget we met before Wikihood. Featuring all 13 Org. Members, Donald and Goofy as Joseph's companions, and some other thing we can incorporate into the episode as it moves along.

Look at this version of DiZ! 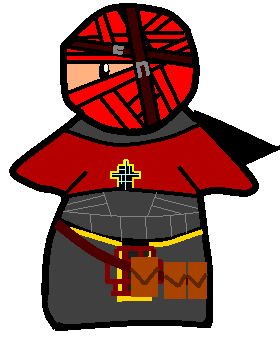 YOU NEED TO SEE THIS

This is the most epic prank call! Watch it here:

...wait do you really think that well is gone

Everything You Know Is Wrong

I don't have a PSP. I stopped liking Kingdom Hearts so much after Roxas triumphs in the end anyway. I am actually hesitant on buying KH 358/2 Days because of the massacre Roxas commits in KH2 being present regardless. I like Organization XIII, but when they all died, I went with them. Noxigar 22:07, 12 December 2009 (UTC)

damn I want a PSP -- Badstar

I got Metal Chocobo, but haven't beaten Hercules. However, I will farm White Mushrooms in Deep jungle to get a much more significant shield for Goofy. Noxigar 17:32, 20 December 2009 (UTC)

The Feud That Never Was

"I'd simply be the worst user ever seen."

listen, this seemed to have started with chaen of memoraeez so i'm just going to say: give a link to exactly what chwoka (or skull, i don't really get the point of parodying someone's stuff to affect a different person) did to you that made you write chaen of memoareez.  yup  01:58, 30 December 2009 (UTC)
WUW Edition! - Chwoka added me in it w/o me even wanting to be in it.
Wikihood - Chwoka decidedly attempted to ruin it. Episode 37 is proof enough. Noxigar 02:19, 30 December 2009 (UTC)

wuw edition is harmless
but i don't wanna read wikihood so i'ma give you the benefit of the doubt here and say that chwoka started this and if you stop whining about chooms or whatever we'll stop riffing absurd originality  yup  02:51, 30 December 2009 (UTC)

For a crappy movie and even crappier universe, Hexxus sure seems like one helluva guy. Implying he even is a guy, though. At least I know which later universe to go for once the backtracking phase is done in terms of Wikihood. Noxigar 17:33, 2 February 2011 (UTC)

Screw you guys. Ferngully is a great movie.

OH WAIT REMEMBER THAT ONE TIME YOU SAID YOU WERE BORED HIGH SCHOOL STUDENTS? I BELIEVED YOU. Noxigar 02:26, 8 February 2011 (UTC)

okay you do realize you are a univeristy student taking time out of your day to make fun of three 12-year-olds' writing skills right (because you're riffing stuff from like 3 years ago) — ChwokaTalk 03:36, 8 February 2011 (UTC)

what are you talking about.— ChwokaTalk

Gee, I remember a Pokemon: Strong Bad version being riffed. I also remember being told to get a sense of humor. So I got one.Noxigar 18:18, 8 February 2011 (UTC)

we've been had, boys. noxigar has obviously been the puppetmaster/pottle in this whole scheme  yup  01:07, 9 February 2011 (UTC)

Well, Noxigar, it's nice to know that you're using RiffText as a conduit for your amusing schemes, especially considering how little Lightning Guy held back in that EYKIW riffing. Keep up the
work, I guess. I'll try to skim through it one of these days.

It's nice to know that my schemes are amusing to someone. I'll keep up the work, given that I try not to clog Recent Changes so much. To Lightning Guy I can only give thanks. EYKIW was a tad dated, so I expected either Chwoka or you to riff it, given its oldness. And the fact it used to be on the HRFWiki and halted ever since 2008. Noxigar 01:45, 11 February 2011 (UTC)

I am merely trying to see why Pokecapn likes this particular group. He keeps faving them vids on YouTube, and as a fan of Pokecapn I notice those things. Noxigar 06:50, 6 January 2013 (UTC)