Welcome Cryptogamer12! Be sure to read the rules before you do anything!

"Yes I know that I'm insane"

I get to go to the clinic twice a second in this club! And they sneak in PS3's!

Yes, there are few sane people here. Luckily for you, I'm one of them! Welcome to the wiki!

Who is SKHS? Lucian Summers

Hey! You got to it before me!

No, I mean Raiku! I'm just saying you type faster!

Yay for Kirbychu's resort! Down with stupidity, up with something you can blame it on Insanity! SuperCryptogamer12 05:11, 24 December 2008 (UTC)

And why wasn't I, the insanest person here informed? FloppyDongHersh

Hi, SKHS! Well, you can make a show. Review, talk, even, like me, make a book-type deal, and transport your emails if you like! Basically, almost anything. Also, make friends. You have two already here! And most of all, make pics or have people help. Oh, and try to draw me here. If you want more, feel free to ask!

Were you referred here by Ninja-Pom Pom? I'm only assuming this because of the above post, that makes it seem as though you already know him from experience.

Actually, I heard about this place before I even met NPP. I did know him before I actually got here, but it took me forever to find a link here, because Google wouldn't do anything. I eventually found a link here on Homsarstrongbad150's page on Raiku's wiki. But yes, NPP is my friend. SuperCryptogamer12 04:04, 30 December 2008 (UTC)

come to my b-day pwarty?

Fanta can be my gift. And I'll probably get drunk!

{Does an Irish Riverdance before imploding} FloppyDongHersh

Will YOU come, SI?

Guests are already coming! Click on B-day on my page.

Me, SR and Raiku started our wiki

that's a funny one raiku

if you want real help with interactives ask chwoka or conchris

Likely because my good computer won't download Java, and the other one took nearly the whole night just to load RuneScape. Though I did just click IRC on EWiki. SuperCryptogamer12 02:09, 12 March 2009 (UTC)

Well, my life's completer! Weclome Back! Oh, and nice job on those YouTube vids. SuperCryptogamer12

Can we reuse the original episode 1?

MS keeps turning all the green colors grey, for some reason. On the color bar, it's green, but if you use that color in the pic, it turns grey. SuperCryptogamer12 20:48, 23 August 2009 (UTC)

It seems Megaman sprites do that. Just don't do Megaman and it's good. But it might be pics related to it too.

Wierd, because, to make the base sprite, I edited the Pan Pan sprite. Do you think Chaos or Bell would know what's going on? SuperCryptogamer12 20:53, 23 August 2009 (UTC)

Maybe. And I edited the Pan Pan sprite fine.

Actually, I know how to fix the megaman glitch. MSPaint's fill bucket doesn't cooperate with .gifs. What you need to do is either recolor the png version instead (which is next to the gif one in TSR), or if you want all the sprites copy the gif version into Paint and recolor it like that. Just remember to save it as a .png when you're done. ;)

I tried .png too, but it didn't work.

He be shooting ta Companionz Cuba.

You stated that if you list three things you go "Crap, crap, and more crap". May I point out that the second comma is pointless? FloppyDongHersh

Untrue, I'm pretty sure it was ruled last year that either way would be grammatically correct. Clover echoing the sound 22:26, 5 December 2009 (UTC)

Well, that's the way it was taught to me. Oh, and did you know that last year the UK abolished apostrophes? SuperCryptogamer12 06:03, 6 December 2009 (UTC)

You won the Weekly Contest. 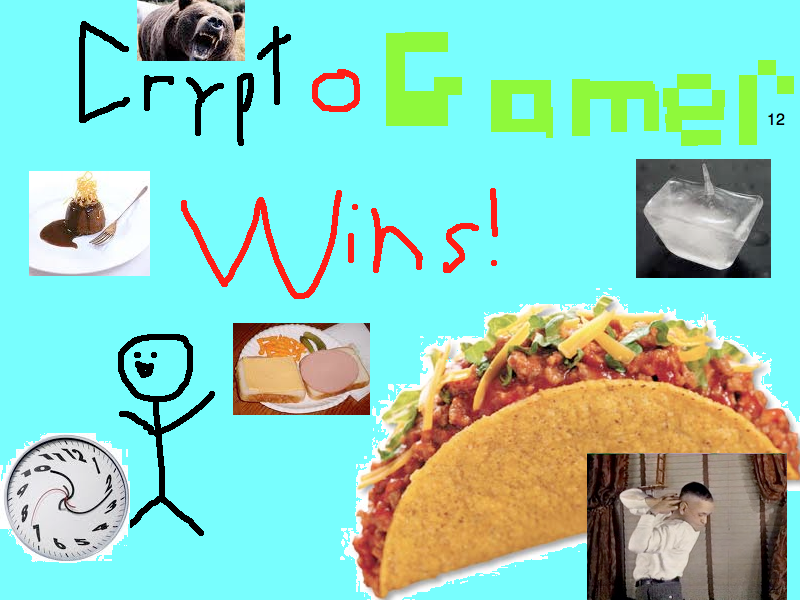 I just came to inform you that the Hellian Empire is now inviting members, if you join now, you will get free healthcare and a muffin basket. If you do not join, you will feel our wrath! This was a message from Brerose 02:55, 7 September 2010 (UTC)

You're addicted to Alcoholics Anonymous?