Talk:Everything You Know Is Wrong

I wanna be in this! -- Badstar

I'd like to be in it to! (If it's possible) Limoman

Heh heh, 'tis good. Though, is it just me or is this episode crazier than the last two? -

Everyone loves the Summy!

Hey, You can't have an abridged series without me! Everyone loves the Summy! - Sum 14

To tell you the trooth,

b. No cuss words are said.

c. How would a "Cyrus and Garzel kick Strong Bad and Strong Mad's butt" plot be a sketch show?

OHNOES! The MEA's are open, you're pending deletion and the Liteblue CEA is your's! Quick! Grab it! 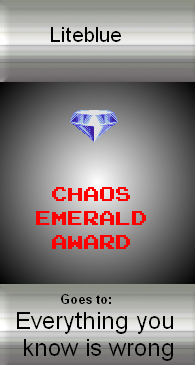 {Sarcastically slow claps.} Bravo. You've succesfully made Homsar44withpie an antoganist in this series for trying to enforce the rules that you don't even follow. It's like making cops an enemy because they enforce the law. Bravo. Endele' endele' ariba! Ariba! See you in the Wiki User Wiki (Fanstuff hell)-MikeControl 02:50, 28 October 2007 (UTC)

(To IAB:) I wasn't talking about H44WP as the antagonist. I was talking 'bout butter "See you in the Wiki User Wiki (Fanstuff hell)" Lucian Summers

Oh. Well, it's true! WUW was created for the sole purpose to house fanstuffs that are grood, but just aren't HSR. belstrnnmmvnmn 17:54, 28 October 2007 (UTC)

Elements of [Reality is a Harsh Mistress] are parodied, such as the random shippings in it. What random shippings? The only shippy thing that happens is the Cheerleader/Strong Bad thing, and I didn't plan that. It just happened while I was writing it. Shwoo 01:51, 27 October 2007 (MDT)

Did you even read Reality is a Harsh Mistress? Strong Bad had better things to do than randomly make out with his little brother. The Strong Bad/Strong Sad was in one of the stories I submitted to the fanfic100 challenge. Shwoo 18:30, 28 October 2007 (MDT)

be in the next episode? Tahu