Homechat Gamer RPG is a fake game with the concept idea by Strong Rad. If this were real, the player could've played as Homechat, Ninja Pom Pom, Mulzipan, and possibly Coach D and Strong Grad to defeat the villains, Strong Rad, The Exact Same, and Strong Had.

Other NPCs (these guys I made up) 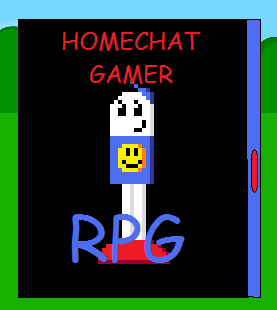 Walkthrough (something real for something fake?)

Level 1: Tuns's Small Business Stand (How can I service you?)

HOMECHAT: I guess you weren't the real villain after all?

MULZIPAN, STRONG GRAD, AND COACH D: Then who was?

HOMECHAT: If it was that "scary guy", then what part did you take?

STRONG RAD: I was trying to warn you guys.

THE EXACT SAME: {translated} I hear there's this new game at the Home-Cousins' House.

REST OF THE CAST: Sure!

{The credits scroll up and then the words "You did it!" "You saved Free Island!" appear, and it cuts to a blue screen saying "You unlocked Extended Play!" and "You unlocked Others Play!".}