The Sad Life of a Doll

Some characters give the log of their Whirled days where they have played, and they've all quit. Why? Well...read it.

DISCLAIMER: I have not quit on Whirled.

- Hey there. It's me, Fenri. Well, TJ got me into this whole Whirled thing. He says it's for a few reasons, which include making friends, tricking out your own Whirled rooms, playing games, and making things such as avatars and furniture to sell to other people so they can trick out their Whirled. Seems fun to me! I seem ready to start!

- Sweet deals! I saved up enough to buy me a Sonic avatar! It comes with this cool state where I become Sonic the Werehog. Friggen awesome!

I also met a few people, but I got creeped out a bit. This one person, looking like some girl, came up to me. Here was our conversation.

My mechanical Reploid heart had stopped for a bit. This girl (or so I thought) was asking me for my personal info.

I quickly shut off the computer and played some SSBB to calm me down.

Then I got mad because it's hard to play Brawl without normal fingers.

- Okay. I feel up to playing Whirled again. Maybe emobabe is gone. After loading up my house, I decided to pop into Brave New Whirled. That's when my jaw hit the floor. No, literally, it detached and dropped to the floor. I'm a Reploid. Things like that happen.

BNW was swarmed with them. They were all asking people for personal info. I wanted to say some more, but I decided not to. I moved to the arcade, and after reattaching my jaw, it fell again. There were EVEN MORE. I spotted like, 10 of them. I wanted to get away from all this, but at the same time, I wanted to find out more. Maybe tomorrow...

Now, how might one spot a Doll User? Well, it's not just the outward appearence, it's the name and how they act. Most words you may find in a Doll User name are: emo, skater, cutie, cute, hottie, sexy, babe, etc. Now, normal Whirled players just play the game for a few reasons, which include making friends, tricking out your rooms, playing games, and making things stuff to sell to other people. These people...

Their main purpose is to find an online bf or gf. Sometimes they might ask people stuff like "a/s/l" or "how old r u" and will pester until you give up your info. Predator? Or maybe a hopeless loser who hasn't been to the outside world and has no real friends?

I'd say both. And I don't want to be around loveless losers.

This is Fenri, signing off Whirled. For good.

- Hello, Whirled! Actually, I've been playing since Fenri quit. Yeah. There are a lot of dolls walking around, and it pisses me off. Even in the arcades I see people bashing them. I've made friends that are static haters. I could name a few: Chick, Gryphon, Shiro...eh. So, I've decided to take a look at this stuff. 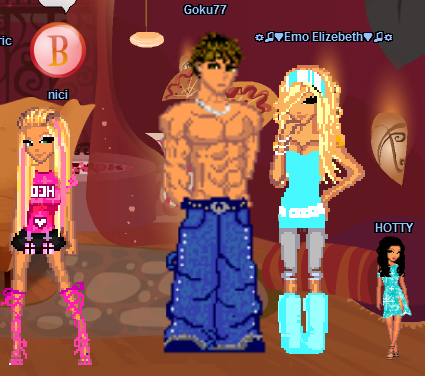 Look at them. Look at those sadsacks. Trying to use names like "HOTTY" or "sexygurl" isn't going to do jack s**t.

They use these avatars to try to take their real life appearance and turn it "hotter." Hey, if we all really looked like our Whirled avatars, I'd be an anthromorphic cardinal. They believe having a "cute girl" or "sexy guy" for an avatar will attract people.

It makes me sick. Let me go puke now.

- SCORE. I got the Kawaii Cleric. Woot.

Yeah, I'm happy alright, but the statics are all a downer. 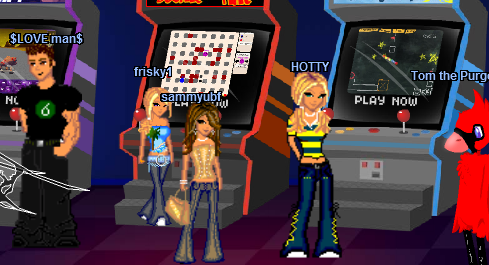 Seriously, what the hell?! Why are you looking for a boyfriend or girlfriend online? Whirled is not a "who has the sexiest avatar" contest. It's a chat site with fun games and other things to do. People like me use Whirled for its true purpose. Heck, I've got a sweet-ass room going on.

So, after bleeping (as in making their avatar not show up, get your mind out of the gutter) doll after doll, I get to the main static hater's spot, the pool table in the arcade. No static dares to go up there, they get too distracted by the "sexy boys and girls." All of a sudden, one of them says this. 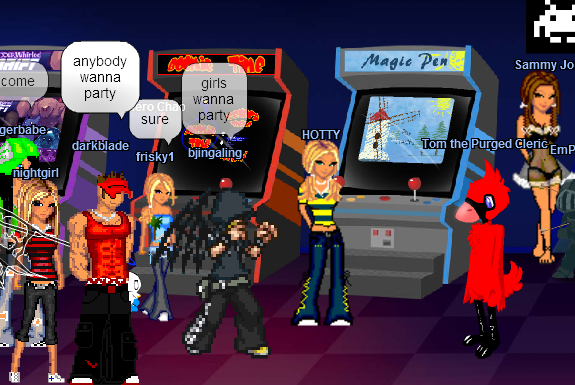 A party? Sounds dumb, but it's worth a shot.

This was followed by me puking again.

WHAT THE HELL?! WHAT THE ****ING HELL?! Why were those two dolls doing it?! HOW WERE THEY...I really don't want to think about this. I need some rest.

Oh great. JUST EFFING GREAT. That image is forever burned into my memory.

- Hey. I heard about the whole doll junk. Just signed on. I witnessed the same horrors Tom and Fenri did.

My word? You want my opinion? Well, I have a group against these types of people because 1. These avatars are total eyesores. 2. I'm sick of your whining for an unreal boyfriend or girlfriend.

It's the shiny blinding orb in the sky. It's called the sun.

Maybe you will find love, but true love only happens offline.

In simpler terms, get out of the house and meet people. Real people.

- WOOT! I just started my Flipbook avatar! Now I can go around Whirled as me!

So yeah. Whirled? Totally overpopulated with dolls. TJ gave me his account, so now I'm TJ the Killer Bass. Is there a way to change your name?

Maybe, but anyway, I witnessed the coolest thing. I saw a doll being told off by, of all people... 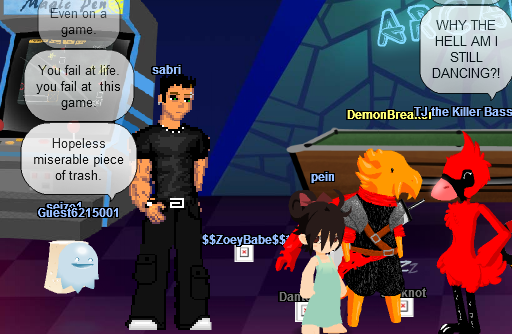 A random guest. I didn't know WHO this guy was, but he was on fire. He was telling off that static like there was no tomorrow.

The guest told me he was one of TJ's static hating friends. His name was Tony T. I eventually saw him un-guested.

Tony, you're my hero.

- Jeez. There's more than I thought.

They invade every popular place on Whirled. But I'm not giving up yet. 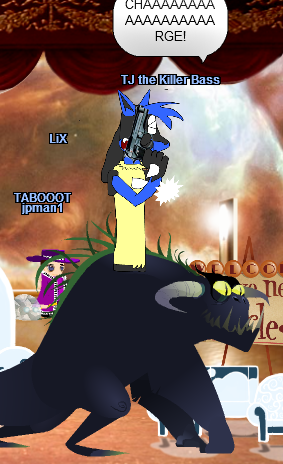 I figured out how to change my name, you gotta go to the profile section and click edit profile.

Anyway, it was out of BNW and into the Arcade. There, I met up with another static rebel. 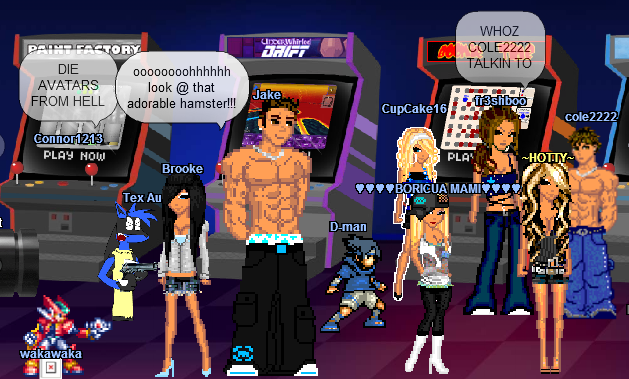 Good ol' Badstar was there to help me. I also met up with some of TJ's other friends like Blue Dragonfly and Riolu. We raised some hell.

So this was it. I heard two dolls were going to do something in private. I asked if I can come to, and she said yes. Kind of ironic, right?

It's time for the Peeping Tex show! 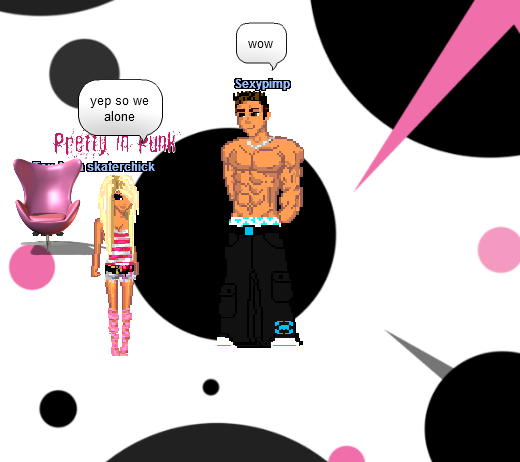 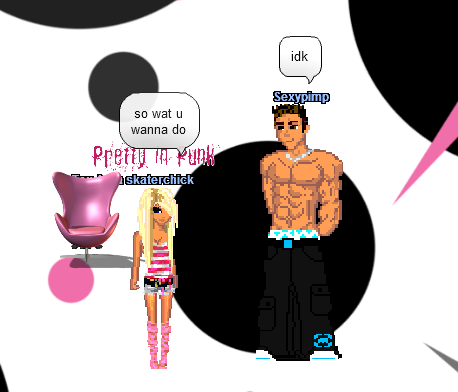 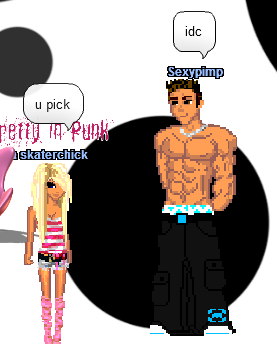 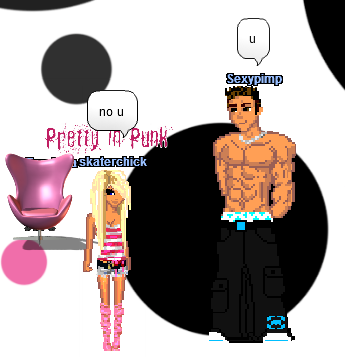 Argh. That sucked. I didn't get one little peek. And she even said she'd let me in.