Once Skullbuggy finishes Ryan's sprites, the comic will begin! 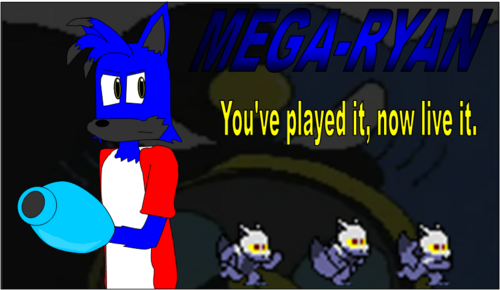 Ryan Bluefox is a anthromorphic blue fox, and the main character. After beating all six Megaman NES games, he is teleported with his friend, Lupecario, to the Megaman world, where he finds the Megabuster, and uses it to splo stuff up.

Axel "Lupe" Cario, sometimes called Lupecario, is Ryan's Neopet friend. He is warped into the Megaman world with Ryan. He doesn't aquire any weaponry and fights hand to hand, but will sometimes hack into one of the enemies in the game. Hacked enemies are colored like him.

Airman is one of the Robot Masters in Megaman 2, and the main villan of the series, seeing as he's presumed unbeatable (although Ryan kicked his ass before). He overtakes Wily's Castle after Wily's defeat.

Woodman is Airman's hand-picked partner in crime. He was chosen by Airman because of his agility, and the fact that his weapon, the Leaf Shield, is Airman's weakness.