This is the Wrestling Association of EWA, known as Extreme Wrestling Alliance. It's basically a wrestling e-fed, using the Fire Pro Wrestling GBA game to make wrestlers. For example, here's a picture of a character that has been made. 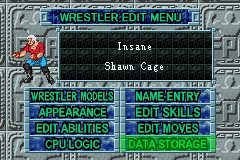 So, I've already started making a roster, and now I'm going to post who I have done.

People I have left to do are:

Second show is being worked on