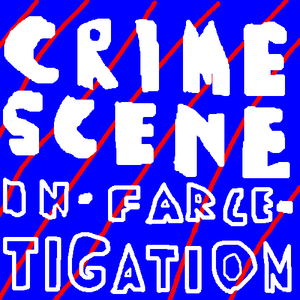 Crime Scene In-farce-tigation is a SpongeBob SquarePants episode from season eight. In it, the Krusty Krab is robbed clean, and it's up to SpongeBob and Patrick to find the culprit.

(Open to the Krusty Krab. Mr. Krabs drives up and walks to the doors.)

Mr. Krabs: Ah, opening time. Where me customers feed their bellies and I feed me unhealthy obsession with legal tender.

(Mr. Krabs opens the doors to find everything in the restaurant gone.)

(Mr. Krabs runs to spot where the cash register was apparantly located, kneels down, and cries deeply.)

(SpongeBob walks onscreen and taps Mr. Krabs on the shoulder, causing him to jump through the ceiling.)

Mr. Krabs: (from the roof) Goodness, me boy! Don't scare me like that!

(Krabs jumps back down and brushes himself off.)

SpongeBob: Sorry, Mr. Krabs. I just wanted to know where everything went.

Mr. Krabs: I wanted to know that, too.

SpongeBob: How could this have happened?

(Cut back. Mr. Krabs is still staring at SpongeBob. He finally rolls his eyes and groans.)

Mr. Krabs: Now that a whole episode's been wasted, I might as well go ahead and give ye the task.

SpongeBob: (eyes bulge out like some yellow idiot) Ooh! A task?

Mr. Krabs: Yes. I need ye to find the scumbag that robbed me store and get me stuff back from him.

SpongeBob: But isn't that dangerous?

Mr. Krabs: Of course! Why else do you think I'm not doing it?

SpongeBob: Good point. I should at least get some help though.

SpongeBob: OK! Catch you later, Squid! (does some kind of shooting action with his hands)

(Cut to Patrick's rock. SpongeBob runs up to it and knocks. Patrick picks up the rock and jumps out.)

Patrick: Hello? (squeezes SpongeBob's face) Mario, is that you? One more minute and the pizza would have been free!

SpongeBob: Patrick, did you forget to wear your contacts again?

SpongeBob: Nevermind, Patrick. We've been granted a task, and we only have a couple of minutes to complete it.

Patrick: A task? Well, why didn't you just say so? (sticks his hand into his belly button and pulls out a small box)

SpongeBob: What's in the box?

Patrick: My contacts! (takes his contacts out of the box and sticks them to his eyes)

SpongeBob: Um...Anyway, someone's robbed the Krusty Krab, and we have to find him.

Patrick: What crusty crab? That red, sweaty guy you work for?

SpongeBob: I'm sorry, Patrick, but the clock is ticking! Can you please just help me?

Patrick: Alright, SquarePants, I'll fold. But only because I like ya.

SpongeBob: Great! Now, the first thing we need to do is investigate the scene of the crime.

(Cut to the Krusty Krab. SpongeBob and Patrick are looking for clues when Mr. Krabs calls them to the office, where he sits indian style on the ground.)

Mr. Krabs: Did you boys find anything yet?

SpongeBob: No, just this penny. (holds up a penny, which Mr. Krabs then vacuums up with his wallet)

Mr. Krabs: 'Tis a shame. My recipe's still in the safe, so Plankton probably isn't behind this.

Patrick: Plank? I think you've got the wrong cartoon, bub.

Mr. Krabs: Patrick, just do me a favor and never speak to me again in my lifetime.

Mr. Krabs: Now, I don't know if this'll help, but I found this lodged under me office door. (takes a tiny green sphere out of his shirt pocket)

SpongeBob: Ew, a sour kelp ball? The only two people I know who can stomach that dookey is Patrick...

SpongeBob: And... (face suddenly gets all serious and crap)

(Cut to a beaten down trailer. SpongeBob walks in to find none other than Bubble Bass flossing his teeth.)

SpongeBob: What are you doing out of the first season, Bubble Bass?

Bubble Bass: So, what is it that you want? Girl advice?

SpongeBob: Why would I go to you for girl advice?

(SpongeBob takes a picture of a realistic dolphin out of his pants and gazes at it longingly.)

SpongeBob: I swore that I would never love again after you took her.

SpongeBob: (puts the picture back in his pants) But this isn't about that. This is about you robbing the Krusty Krab.

Bubble Bass: What a harsh accusation! And a wrong one, at that. Do you have any evidence to back this up?

SpongeBob: As a matter of fact, I do. (takes out the kelp ball) What do you have to say to this?

Bubble Bass: I stopped eating those awful things years ago! I now restrict my diet to fried clams and sparkling slime, with the occasional goose egg. (takes an egg from his cooler and swallows it whole) Yep, hits the spot.

SpongeBob: Do you really expect me to believe that, you big barnacle?

Bubble Bass: I know you don't like me, SpongeBob, but you're going to have to face it. I didn't steal from your precious restaurant. I wouldn't want to face your red, sweaty boss again, anyhow. He pinches like nobody's business. (rubs his arm)

SpongeBob: Yeah, that Mr. Krabs sure is great.

Bubble Bass: You really are an idiot, aren't you?

SpongeBob: Whatever, Bubble Bass. If you didn't do it, I'll need your cooperation in finding the real criminal. You've been around. You know what's going on.

Bubble Bass: I also know that you aren't finding the criminal, because I'm not helping you.

SpongeBob: But if I don't figure out who robbed the Krusty Krab before time runs out, my job is on the line!

SpongeBob: This is a children's show, Bass!

Bubble Bass: You can kiss my bass goodbye.

(SpongeBob takes the picture of Amanda out of his pants, and sappy love music begins to play.)

Bubble Bass: Unlike you, I got over Mandy after we broke up.

SpongeBob: Fine! (sticks the picture deeep into his pants) Be that way! I tried to give you a another chance, but as of now, you can kiss my sponge goodbye!

(SpongeBob is thrown out of Bubble Bass' trailer. The kelp ball rolls away from him and Patrick picks it up.)

Patrick: Hey, it's that sour kelp ball I lost yesterday! (throws it into his mouth) Yummy.

SpongeBob: That kelp ball was yours?

Patrick: Yeah, I must have dropped it while I was getting my midnight snack.

SpongeBob: You get your midnight snacks at the Krusty Krab?

Patrick: Since you started locking the door to your house.

SpongeBob: (facepalms) Patrick, you made me walk all the way over here for nothing!

Patrick: It wasn't for nothing. I got my sour kelp ball back!

Patrick: What's wrong, SpongeBob? Do you have a wedgie?

SpongeBob: (angrily) Why didn't you claim the kelp ball when Mr. Krabs FIRST SHOWED IT TO US?

Patrick: That was a sour kelp ball? I thought it was was war memorabilia!

Patrick: (waves it off) You know how those old guys are.

SpongeBob: Well, now we have absolutely nothing to go on. Let's just tell Mr. Krabs what we didn't accomplish and call it a day.

(SpongeBob and Patrick walk back to the Krusty Krab sadly. Suddenly, SpongeBob spots the Chum Bucket and gets an idea.)

SpongeBob: I know! Plankton never leaves his restaurant! He had to have seen something!

(SpongeBob and Patrick run into the Chum Bucket and look around.)

Karen: (rolls into the room) He's on vacation. What is it you need?

Patrick: (scared) SpongeBob, that pole is talking to us! Let's make a run for it!

SpongeBob: It's not a pole, Patrick. It's Plankton's wife. (to Karen) I just wanted to know if you saw who robbed the Krusty Krab.

Karen: I am a computer. I can't see anything.

Karen: I am well aware of that, yes.

(There is a long pause.)

(Patrick jumps onto a table with a plate of holographic meatloaf on it. The table breaks and the hologram short-circuts, turning it off.)

Patrick: (sheds a single tear) Where my meatloaf has gone?

SpongeBob: Come on, Patrick. We have music to face.

Patrick: (recovers from his depression) Ooh, I like music! It pleases my earlobes.

SpongeBob: This isn't the kind of music you're going to like, Patrick. (sighs)

(SpongeBob and Patrick walk to the Krusty Krab once again and open the doors to find everything back in place.)

(Mr. Krabs walks out of his office and eagerly embraces the pair.)

Mr. Krabs: The status quo has been upheld, me boys! (gives SpongeBob a noogie)

SpongeBob: Where did you find your things, Mr. Krabs?

Mr. Krabs: Funniest story: I was driving to me daughter's school to pick her up when I found me items hitchhiking on the side of the road!

SpongeBob: (laughs) Wow, so they did sprout legs and walk off after all!

Patrick: I'm finding it very hard to believe all this.

Mr. Krabs: That's because you're an idiot, Patrick. Now scram!

(Patrick runs into the doors then falls down unconscious.)

Mr. Krabs: Did I forget to mention that lock system I just installed? Whoops.