Being a Troll: The Guide for Idiots!

I bet you've thought to yourself many times, "Gee, I wish I weren't such a goody two-shoes!", haven't you? I cannot blame you if you have. After all, nobody wants to stay good forever, do they? Being good is overrated anyway. Have you've ever had a mean-streak, but didn't know what exactly to do?

Well sir, look no further! For I am here to remedy this once and for all!

With this brilliantly well thought-out guide, I can change you from a goody two-shoes into a nasty and despicable troll in no time! Not only that however. I will also teach you the ways of evasion and disguise, so whenever the authority tries to shut you down, you can just raise a big middle finger at them!

Don't be too hasty, my friend! While I'm sure you're eager to be the nastiest mofo there is, you still need to know the basics. After all, "It takes one to know one!"

So here's a little encyclopaedia on the different types of trolls you can find around here.

Despite being the most common of trolls, it doesn't particularly mean that they are the worst kind either. No no no. In fact, the common vandal can happen to be one of the most intimidating types out there, using all sorts of different methods to piss people off. The easy ones, like page defacing, profanity, shock images, all that sort of stuff.

Strength in numbers definitely apply here. The more the merrier, I always say!

Different to the Vandal in that they do not touch pages directly, but instead take advantage of the moving system to make their message clear. By renaming pages, they are able to deface the recent changes with their own messages. A creative use of profanity and insults is encouraged, as even if the page is deleted or moved back, the offending text will still stay. Unless of course, measures are taken to clean the recent changes. But that's rather unlikely.

These trolls, are really just previous blocked trolls. They are multiple accounts used by the normal trolls. Usually with a different name. These trolls are respected in the troll community, as they usually never go for good.

One of the most rare kinds of trolls. These are used by one person only, most of the time, using a bot program to Troll countless pages all at once. These are really respected trolls, due to the difficulty to revert.

All trolls need a Celebrity Role model, so this section is where you turn to. These trolls are here, do to their: Courage, Bravery, Annoyingness, and their skills to stay.

One of the most well known bots, that spams an inapproprite message on pages from A to a funny Z. Make friends ASAP, or disaster could happen.

An expert on sockpuppeting. Respected by troll community, for he can make NSMC-style IP's.

Famous Sockpuppet Troll. As funny as his namesake.

A kind of neutral troll, as he usually only vandalizes pages, with the words Shut Up. Could use more effort.

A pretty funny troll, due to his tendency to make fake accounts using very funny swears. He doesn't make much edits, but when he does, they're bound to be gold.

WUW's very first original troll. Contributed with Page moving, and also reviewed this guide himself, complimenting it. Also, a proud owner, and user of this very useful guide, to trolling. 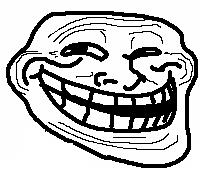 This isn't a troll, but it is the sign used by them. It is very famous, used outside wikis and it is sometimes featured in Rage Comics.

As A Troll, you are bound to get enemies. If you don't, you'd be the first.

The Normal Users. These people can't do much, but revert your art. Though you can strike back by spamming their Userpage and Talk.

These people you should fear. As they can block you for quite a while, even forever.

A step above users. These guys don't come until a smaller being tattles on you. Think of it as an inactive sysop. 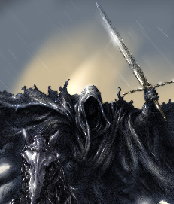 Bureaucrats 99% Spell the end for a troll.

Don't bother going against these, you've died before you got to them. However, if you do get a chance, which is rare, change your I.P somehow. They'll block your I.P.

Stop one on this terrible tour through your internet villain demise includes Super Sam. He'll block you right away and relentlessly.

If you've ever seen such a more dangerous sysop, you're on Prauge Wikipedia. He'll stop at NOTHING to take you down. Make enemies and kiss your I.P. Address goodbye.

This is not good. He'll block you so fast, so quickly, you'll have no ability to touch the "Save Page button after the first time you've vandalized a page. However, chances of encountering him are extremely rare.

He currently only has blocking powers on here, but he still knows when to deliver on the hurt.

Like a lone gunner, Znex will ban you for a nonsensically serious amount of time. One time he blocked a vandal for 1234 days. It's still not a good idea to mess with him.

Even though he doesn't have any powers, he is great at pretending to be. He got the award for backseat mod of the year! He's also the biggest tattletale on earth. I suggest not messing with this dude. 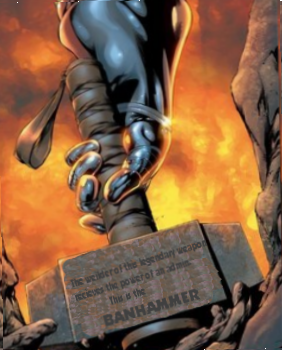 Rumor has it that the creator of Wikipedia is well aware of the vandal threat. At first he thought it wouldn't be too bad, so he gave people moderator and up blocking powers. But since it has so epicly grown, he's really decided to take it to the next level, and create A complete vandal destruction program called "BANHAMMER". This program will not only block you, but it will lock your I.P. Address from every system using wikipedia-cloned technology. In short:YOU GET BLOCKED BY IT, YOU'RE DONE WITH WIKI TROLLING EVERYWHERE FOREVER. If this device should become real, it'll blast you to hell and beyond for sure.

You want to vandalize the wikis, but have no clues which Wikis to Vandalize? Well, here you go!

A Dumb wiki full of weirdos, who actually research things about that dumb cartoon Homestar Runner, and putting it on there. This place is a great place to vandalize. Plus, it'll do them a favour. They need to get a life.

What's worse than the Nerds at the HRWiki, eh? ......The Fanstuff Freaks. The nerds at HRWiki only researched stuff about Homestar Runner. These guys actually create stuff about it. These guys do crap like, drawing pictures a 5 year old can do better, and even writing little stories that no one, except for the creator reads. Vandalizing this Wiki, gives them something better to do, in which you can make things worse for them, by intimidating them.

They believe that knowledge is power, don't they? However, in this case, if Knowledge is power, what would Vandalism be? It would be more than power, it would be a form of art. Wikipedia is an ugly little web site, full of useless crap, that no one cares about. I think that you oughta paint it. Paint it with beautiful Vandalism, and make it worthwhile to look at.

However, this site is full of Admins, and Bots, so be careful. However, it is busy, so you could probably get away with Defacing some pages, and then swearing innocence if you get caught. It's a good idea to be an I.P. Edit, so you can blend in with the crowd.

Oh come on! You must be kidding me! Since they decided it wasn't enough for the HRFWiki losers to make crap, they had to make one so they could make crap about themselves. This one you have to be extra careful of, as a handful of normal losers were chosen to stop you in your tracks.

If you used this guide, and got blocked, please regard it's none of my business. Also, no refunds. You paid money for it, you ain't getting it back. If you plan to get it back, you really are an idiot, as right now, I'm boarding my plane, to start my new life in Hawaii, which I used your money for. So tough luck, losers! {Runs off.}