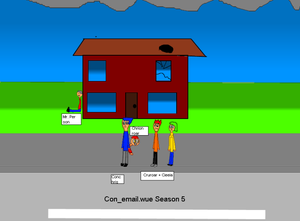 Con_email.exe was one of the classic WUEs of the Homestar Runner Fanstuff Wiki, it was the first WUE to reach 100 e-mails and that it is now attempting to reach an epic conclusion to Season 4. Unfortunately, it may not see the light of day on the HRFWiki, since there is talk that any Wiki User stuff on the HRFWiki should be moved here. Since Con_email.exe was too rooted, only the 120 (including the extras on the front page) emails were saved. This page will mainly act like a placeholder until the day of the purgeance arrives but until then, Season 4 has temporarily come to a close until that day.

Seasons 1 through 4 - 1 to 120
Archive - Awaiting purge, unless Con_email.exe somehow survives.

These Not-Quites are basically little toons/scripts for inbetween emails, they usually allow for new settings, character development or just any random crap I can get off my chest. Ones that aren't marked with an email number and a half are considered to be scripts written for the sake of it.